Jim Beam’s been around two centuries, huh? When celebrity endorsements have graced the marketing industry 50 years or more, it’s surprising Beam chose Mila Kunis as their brand ambassador. Long term ambassador at that.

Ambassadors have long been successful ways for your audience to aspirationally connect with your product, when the celebrity’s personality aligns with the brand and its audience. You can imagine how that might get tricky. But David Ogilvy supported celeb endorsements in the ‘50’s, saying “Testimonials from celebrities get remarkably high readership… The better known the celebrity, the more readers you will attract.”

Kunis is well known, and she’s “liked as much by guys as girls,” claims Chief Marketing Officer Kevin George in a recent Ad Age article. Can you please elaborate on that? I’m pretty sure the reasons guys like her and girls like her don’t line up.

I will argue that men don’t aspire to be Mila on an every day basis. Ogilvy also said “people take more interest in movie stars with whom they can identify” and “men don’t like the same kind of girls that girls like.” Perhaps the strategy for the $13-a-fifth brand found that Kunis’s recent movie roles and demeanor are attractive to men and women. Maybe Kunis is the kind of girl that guys like, and some girls like her too. The ad does mention fashion and staying true to who you are, which I can see both men and women relating to.

All these feelings derive from the fact that the strategy is after men, of course. If Jim Beam wants to use Kunis to win more of the female whiskey audience, that’s great. But the second you turn feminine on a historically masculine product, I feel they’ll lose male marketshare. And maybe Jim Beam is okay with that. Maybe they’ve been losing male marketshare for awhile now. I need more numbers.

It will be interesting to see what happens with the “long-term partnership” and how it develops as Mila’s character identities continue. Will they bring in a guy to repair the damage if it fails? Or will they just let it fail straight into the ground? Or, will it succeed?

All I know is that I still identified with Jason Segel in Forgetting Sarah Marshall, despite Mila’s more attractive laid back, sensitive, tough girl attitude compared to an immature Segel with his life being in all sorts of shambles. And I definitely will drink whatever Frank Sinatra drank over a current day actress, or probably any other celebrity for that matter… as long as I can afford the $150 price tag. 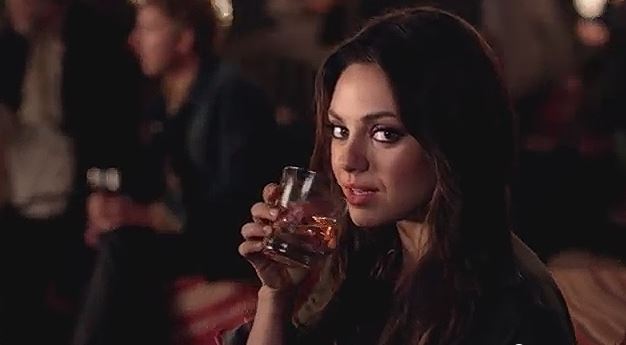 Mila Kunis my Jim Beam rep? Not quite feelin’ it.

Sidenote: Frank Sinatra edges Mila Kunis in the PPC ad battle. Kind of helps to have your own line of whiskey products to make Product Listing Ads. Keep an eye out for more PPC ads driving queries to branded media pages. Sometimes a brand struggles to beat the ad and news websites to the top of the white space (organic) listings, and the brands have to pay for the ad in order to be seen.